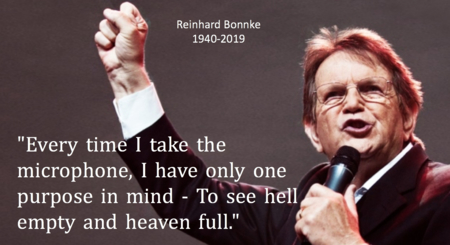 ORLANDO, Jan. 9, 2020 /Christian Newswire/ — A memorial service for the late Evangelist Reinhard Bonnke was held on the 4th of January in Orlando, Florida. Evangelist Bonnke passed away on December 7, 2019. He was 79 years old. The event was attended by family, friends and supporters from around the world, as well as multiple thousands online – all gathered to celebrate a life lived with extraordinary passion for the Good News of Jesus Christ. As Dr. Billy Wilson, President of Oral Roberts University said of Bonnke, “His passion [was] unquenchable, his impact unequaled, his anointing unstoppable, his integrity unquestionable, his evangelistic effectiveness unprecedented and in my personal opinion, Reinhard Bonnke was the greatest evangelist in the history of the Christian Church.”

Reinhard Bonnke was, perhaps, best known for his groundbreaking mass-evangelism work throughout the continent of Africa. There, through Christ for all Nations (CfaN), Bonnke preached to some of the largest crowds ever gathered in human history. In a single meeting held in Lagos, Nigeria in 2000, he addressed 1.6 million people – 1 million of whom responded with documented decisions to make Jesus Lord of their lives. It is no exaggeration to say that Reinhard Bonnke changed the course of the African continent and many leaders from both the Church and various national governments paid tribute to his enormous contribution. Rev. Felix Mebouye, representing the 30-million member Pentecostal Fellowship of Nigeria said, “He might have been born in Germany, schooled in Wales, and eventually settled in America, but it was in Africa [that] he fulfilled his purpose. It was in Africa his mission on earth was realized. Without doubt, he was born for the sake of Africa.”

Evangelist Bonnke stepped down from his mass-evangelism work in 2009 to focus on writing, pouring into church leaders, and spending time with his beloved family. He transferred his role as Lead Evangelist and President of CfaN to his protégé, Daniel Kolenda. He left Evangelist Kolenda with the charge, “You are not to become the custodian of my legacy. Preach the Gospel!” And that is exactly what Kolenda, with the full support of the CfaN team, has done. Even now, they are building on Evangelist Bonnke’s example of profound faith as they begin a “Decade of Double Harvest.” With this Spirit-inspired initiative, CfaN plans to see twice as many people come to Christ in the next 10 years as it did in the first 40-years of CfaN’s ministry. To accomplish this goal, Evangelist Kolenda has developed a multiplication strategy that includes training and sending 20,000 evangelists into the world-wide harvest field by 2030. Evangelist Kolenda said of his late-mentor’s vision, “I believe that the fulfillment of the vision for which Reinhard Bonnke lived is going to go into new orbit now. And we’re going to see it fulfilled as never before in Jesus name.”

Gordan Robertson, CEO of Christian Broadcasting Network, closed the service with this poignant remark, “We’re here today to pass the torch.” He reminded the audience of something many had heard Bonnke share – a confirmation from God, “My words in your mouth are just as powerful as they are in mine.” He went on to say, “The Gospel is the power of God. It doesn’t matter the vessel.” It is for exactly that reason that, despite our loss, Evangelist Kolenda, the CfaN team and the Bonnke family, look to the future with both hope and excitement. God’s Word is not diminished – instead, because of Reinhard Bonnke’s life and example – it goes out all the more clearly through all of us who follow him, even as he followed Jesus.

The memorial service can be streamed in its entirety and free of charge in English, Spanish, and Portuguese at www.cfan.org/live.

About Christ For All Nations
Founded by Evangelist Reinhard Bonnke in 1974 and now led by Evangelist Daniel Kolenda, Christ for All Nations (CfaN) continues to pioneer mass-evangelism in Africa and beyond and to equip the church to fulfill Christ’s Great Commission. To date, more than 79-million people have chosen to follow Jesus at a CfaN Gospel Outreach Campaign – meetings marked by supernatural displays of God’s power to heal bodies, restore lives and change communities. With offices in countries around the globe. CfaN produces written and digital, musical and video content that can be found online. Ministry programming is seen daily on TV stations around the world.

SOURCE Christ for all Nations