15 years ago, Karu, Nigeria was known as “The One Man Village” because of its incredibly small population.  Tonight – the first night of this campaign – more than 110,000 people poured onto the crusade field, eager to hear the message of salvation.  As I preached the Gospel, the massive crowd stood motionless…hanging on every word.  When I gave the invitation for salvation they responded in huge numbers surrendering their lives to the Lordship of Jesus Christ.

After the prayer for the sick, the glory of the Lord rested on that dusty Nigerian field in a powerful way and miracles began to break out everywhere!  Even as we listened to the testimonies our voices were often drowned out by the sound of the crowd erupting with shouts of joy as miracles continued to occur throughout the night.  It was glorious!

Among those healed was:

Tomorrow morning, as the sun is rising, we will be back to the crusade field to preach to thousands of pastors and church workers in the Fire Conference.  Please continue to pray for us and the multitudes that will be saved, delivered, healed and filled with the Holy Spirit this week. 110,000 people attend the opening meeting of the Christ for all Nations Gospel Crusade in Karu, Nigeria - August 2010 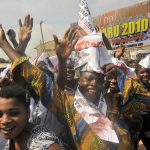 Out of Season, but Right on TimeArticles 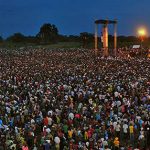